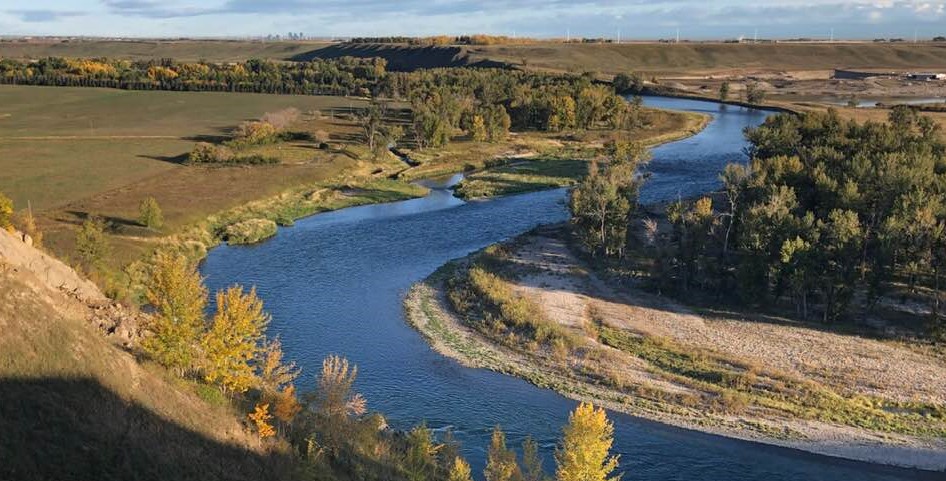 The Bow River fishery has been under pressure in recent years and has seen devastating floods, low river flows in the summer months, higher summer temperatures, increased angling effort, and the possible impact of the Whirling Disease.

A recent report indicates that the Bow River Rainbow Trout population has declined by as much as 50% over ten years from 2003 to 2013. A CRUA report entitled, “Bow River Trout Declines –  What Does it Mean” used historical Rainbow and Brown Trout population data from 2003-05 as a baseline and projects what the trout populations may well be in 2021, and what is possible if no fishery management change is made by 2025.

The 2018 AEP report “Survey to Estimate Angling Effort on the Bow River “ documents the impact of guided boat anglers, non-guided boat anglers, and shore anglers from June to September 2018. The data was compared to the previous survey in 2006 and showed a 15% increase in angling effort in that time period. 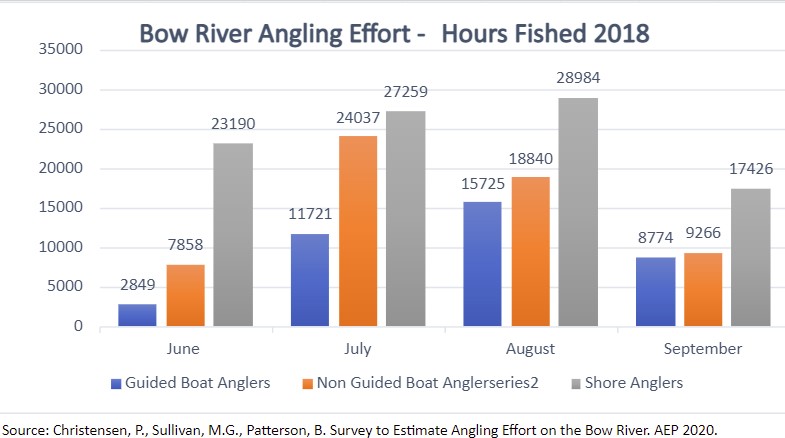 As part of the AEP Bow River Cumulative Effects modelling initiative, the link between trout populations and angling effort was calculated as a “Recycle Rate”. If the total of all anglers catch the same number of trout each year as there are trout in the river, the Recycle Rate is 1. As angling pressure increases along with a decline in trout numbers the Recycle Rate will  increase.

The Bow River has seen both an increase in angling effort and a declining trout population since 2005. This has resulted in the Recycle Rate reaching unprecedented high levels. The following graphs demonstrate  the change that has been seen since 2005 based on different catch rates of mature trout for each group of angler and the accumulated impact on Recycle Rates: 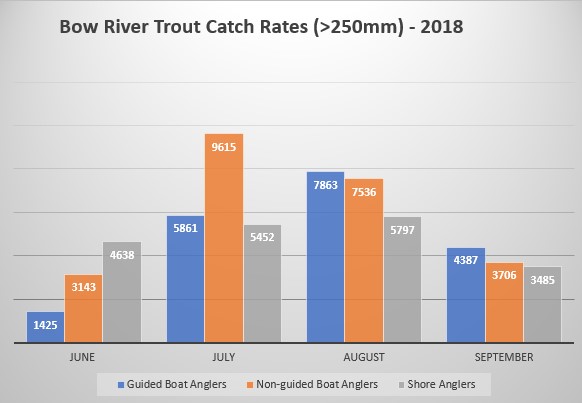 Catch rates are difficult to define, but as they increase, the ability of the fishery to sustain itself becomes questionable. A self-sustaining trout fishery is believed to need a Recycle Rate of less than 2. The following graphs show comparisons of high and low catch rates.

Reducing the angling effort by regulation change is one fishery management option. Gear restrictions are another. Supplemental fish stocking is also possible in the future. Fish habitat improvements, water management initiatives and climate change will also play a role sustaining the fishery. A combination of all fishery management options, and the support of anglers by reducing their own impact on the fishery will be needed to achieve success.