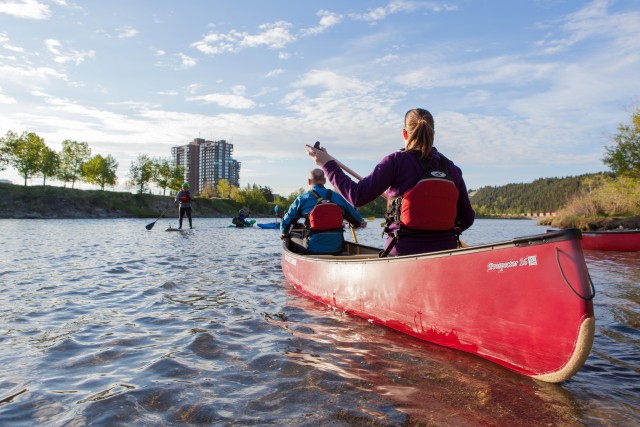 On Monday, February 13, 2017, little more than a year after formation of the Calgary River Users’ Alliance (CRUA), the  Calgary River Access Strategy (RAS) was approved by City Council. As the full impact of the RAS rolls out over the next 6 years we will see the number of boat ramps increase from 6 to a total of 17 and numerous upgrades to designated hand launch sites.

The RAS focuses on four priority areas: criteria for identification of key river access points, environmental impact considerations, educational, and economic opportunities. The goal of the Strategy is to improve opportunities for recreation, environmental education, and economic endeavours on Calgary’s rivers, while ensuring public safety and the protection of riparian habitats. For more details see: RAS Executive Summary

This story began on January 25, 2016 when a group of like-minded river users formed the CRUA to improve recreational, non-motorized boating access to the Bow and Elbow Rivers in Calgary. A Notice of Motion to Calgary City Council was introduced in June 2016 by Councillors Keating and Carra. The Motion directed City staff to prepare a River Access Strategy. Development of the RAS was led by Calgary Parks. The work involved extensive collaboration with several City Departments and extensive public outreach and consultation. Throughout the process CRUA was actively engaged at every step; providing specialized knowledge of the Bow and Elbow Rivers, suggesting access locations, and reviewing documents. We sincerely appreciate the action of Councillors Keating and Carra for their support of this initiative and the professional approach taken by Calgary Parks, Fire Department, Water Resources and others.

Calgary’s RAS was presented to the Community & Protective Services Committee on February 1st, 2017, by Calgary Parks. The RAS was appended with Attachment 2: Priority Sites & Proposed Funding  and Attachment 3: Letters of Support from 17 groups and individuals. At the Committee meeting, 12 CRUA representatives spoke in support:

A big THANK YOU goes out to all CRUA member organizations for their support of the Calgary River Access Strategy. Without this engagement by the local community it would have been difficult to see passage of the strategy through Community & Protective Services Committee and finally Calgary City Council Approval.

Of course, now the real work begins……the RAS describes a 5-year program to develop up to 24 access sites with a total estimated cost of $7,660,000. Over the next two years (2017 to 2019) the estimated total cost for the “priority 1 sites and initiatives” is $1,690,000. These high priority sites have been identified based on safety issues, engagement with river user groups, environmental protection, and accommodation of heavy use and demand on parks or river sites.
Several hand launches have been designated to have improvements done this year using City funds, including toilets and tables. The sites on the Bow River are: Shouldice, Montgomery, Edworthy, Inglewood, Ivor Strong, and Douglasdale South; and Sandy Beach, Stanley Park, and McDonald Bridge on the Elbow. As well, signage is to be designed and installed this year using City funds at designated boat ramp and hand launch sites.
The high priority boat ramps are:

The RAS indicates that $275,000 is supposed to come from grants obtained by river user groups. The City has selected 3 sites where we can contribute funding: West Baker: $125,000; Inglewood Bridge/12 Street: $75,000; and Ogden Road: $75,000. The scope of work includes: installation of boat ramps, parking lots, fencing, garbage cans, and tables.

That’s our next task. While Calgary Parks has offered to do a lot of the grant application drafting and sponsorship, CRUA members will be counted on to sponsor and help submit grant applications.

CRUA’s Google Map details all hand launch and boat ramp sites in and downstream of Calgary.