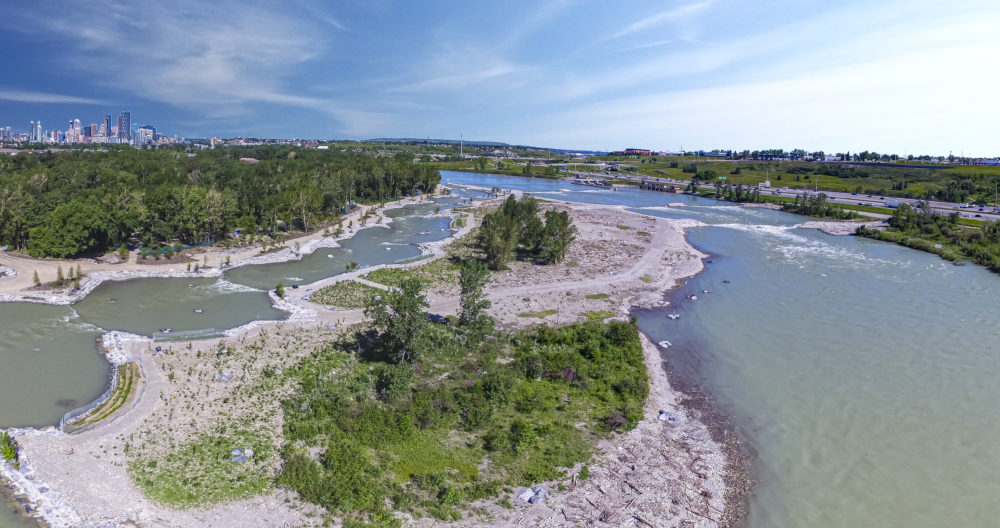 The conceptual design of Harvie Passage as a safe traverse of Calgary’s Bow River – Western Irrigation District Weir was first proposed in 2001. Twenty years later Harvie Passage has become a focal point in the heart of Calgary for a variety of whitewater activities for the competitive and casual paddle community. It also offers a safe traverse of the weir for the fishing angler and river floats along the entire city reach of the Bow River.

The construction of the Harvie Passage- Low Water Channel (HP-LWC) eliminated the safety risk for recreation river users.  Thousands of Calgarians of all ages and experiences take to Harvie Passage each year to enjoy whitewater activities. But the safety boom continues to be installed each year to stop the paddle and float fishing boats from entering directly into the low water channel. To traverse the weir, river floaters need to enter the previously constructed portage channel to bypass the safety boom. Unfortunately, the channel is poorly maintained and becomes impassable under low river flows each spring and fall.

In the summer of 2021, the Calgary River Users’ Alliance petitioned  Transport Canada under the Canadian Navigable Waters Protection Act (NWPA) for a change in the safety boom configuration to better reflect current river use and safety concerns.  The proposal called for a change in the anchor point of the boom on the west side of the river to allow for unobstructed entry into the HP-LWC.

Transport Canada denied any change to the safety boom after consulting with the Government of Alberta and Calgary Emergency Services.

CRUA  believes this decision is regrettable as it does not recognize that there are times when drift fishing boats and larger rafts could get stranded above the safety boom with no possible way to traverse Harvie Passage to a take-out point further downstream.

What are the Options?

Although discussions continue between CRUA, Alberta Environment & Parks, and the City of Calgary to address river access and infrastructure issues at Harvie Passage, the safety boom concerns have not moved away from an entrenched belief that the safety boom saves lives, and must remain in place.

The configuration of the safety boom has a wider opening between the buoys approximately 25 meters off the west bank. This location is used by the Calgary Emergency Response Services to traverse the safety boom during river patrols. River boats could use this location in the event that the portage-safety boom bypass channel is impassable.