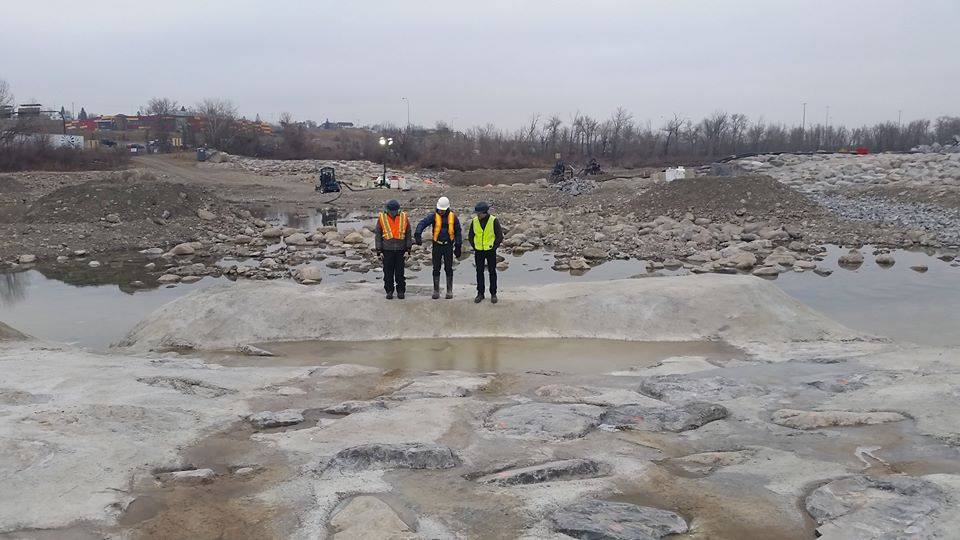 The following is an update from Chuck Lee, Alberta Whitewater Association:

Mike Holroyd, Mark Taylor and I did a site tour of Harvie Passage on November 18, 2016 with Darren Shepard and Chuck Slack from the engineering team to see the progress on the High Water Channel. Over the last several months, the construction has bermed off the river above the #3 Drops and below the #4 Drop so that they could tear up the drops and pour new concrete. They have now poured all the concrete for Drops 3L and 3R and Drop 4. They have changed the angle of the down-slope slope from 1:8 to a 1:10 slope. On Drop 3L and 3R they have placed a kicker across the bottom of the drop and then extended a plate downstream. The 3L Kicker is a chevron shaped kicker with the wings folded downstream. The as-built work is on scale to the work that we saw in the models last year. I am hopeful that they will produce great hydraulic play features.

Looking downstream on Drop 3R. The team is standing on the kicker. The wave should form in front of this allowing for some depth in the trough before the kicker.

Looking across at Drop 3L, the profile looks similar to Drop 3R.

Drop 4 is still under wraps until the concrete cures in a few weeks. So we couldn’t see the new plate that extends downstream from the ramp. There is no kicker on this Drop. The modeling suggested that the plate will create a better wave train and less of a sticky hole at all waterflows.

In the spring the berms in the HWC will be removed and the water will flow down these drops and the the Low Water Channel will be bermed off so the construction can shift over to this side of the river.

While the construction will be largely completed by next summer the project is not expected to be open to the public until the spring of 2018.