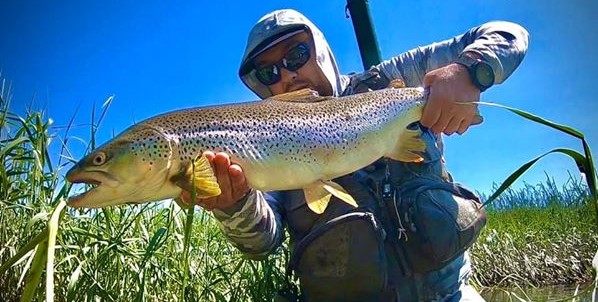 The Bow River is a world-renowned trout sports fishery that is under considerable threat from the human population growth in the region, the ever-increasing demand for outdoor recreational pursuits, environmental changes, and degradation of aquatic and riparian habitat.

A 2018 University of Calgary research paper (2) indicated that Bow River trout populations are in serious trouble. Data analysis showed that the Rainbow Trout population has declined by as much as 50% over ten years from 2003 to 2013. Although the reasons for the decline are unknown, the researchers have suggested that catch-and-release mortality, flood events, whirling disease, and angling pressure may well have contributed to the trout population decline. Because disease and floods are largely uncontrollable from a management perspective, the researchers suggest that stringent tactics such as angler restrictions may be necessary to stop the decline and hopefully enhance the sport fishery.

Alberta Environment & Parks (AEP) conducted fish population surveys across the entire sport fishery from Bearspaw Reservoir to Carseland Weir in 2018,2019 and 2020. That supports the previous research that the trout population has declined considerably over the past 20 years from their highs in 2000-2003. A detailed Cumulative Effect Model for the Bow River fishery is currently taking place to define what fishery management practices can be made to enhance the fishery.

In August 2020 Calgary River Users Alliance (CRUA) expressed our concern about the impact of Bow River water management policy on the fish populations to the AEP Water Policy Branch. After extensive discussions, the Alberta Environment & Parks (AEP) Fish and Wildlife Policy Branch was brought into the conversation to form the current AEP-CRUA Joint Technical Liaison Group to define ways to cooperatively advance discussions to develop both water and fishery management policy to improve the Bow River sports fishery

The scope of the AEP-CRUA Joint Technical Liaison Group:

A review of the AEP-CRUA Joint Technical Liaison Group and the Bow River Cumulative Effect Science Team report(3) is available at the following  CRUA web link.

It will take time for the rollout of water and fishery management changes to enhance the Bow River fishery, but CRUA and our affiliated organization are confident changes in policy are forthcoming.