For more than 40 years the Bow River downstream of Calgary has been recognized as a world-class trout fishery, principally because of the regulated flows from TransAlta’s hydroelectric power plants upstream of Calgary and irrigation needs downstream of Calgary. The constant flow of cold water allows for the growth of naturalized rainbow and brown trout populations to be one of the most unique wild trout fisheries in the world. Up until 2003, the fishery was sustainable with proper regulatory constraints. More recently though, dramatic declines in the Bow River fishery have been documented by the University of Calgary researchers and AEP fishery staff. This decline corresponds with spring floods and low summer flows, high water temperatures, anthropogenic changes in nutrient inputs, increased fishing pressure, whirling disease, and more recent changes to hydrological regulatory regimes.

We believe the reasons for the decline in fish numbers are inadequately studied. The decline is likely the result of the complexities of the Bow River’s highly managed water supply, extreme environmental and climate events, watershed-wide habitat degradation, mortality from natural predators, and angling pressure. Additionally, human-caused changes to water quality compound the complex cumulative effect of a basin-wide managed river. It is becoming increasingly evident that the impact of the Bow River water management protocols may well contribute significantly to the trout population declines, as well as the entire river aquatic eco-system. But unfortunately, very little data is available to support or deny this opinion.

The Expression of Concern

CRUA compiled a dossier that documents what is believed to be the important issues that need to be addressed by the Government of Alberta to protect the Bow River Fishery today and into the future. The documents are discussed below:

The response from the AEP Minister at that time and subsequent engagement on the subject, Letter to the AEP Minister – November-2018 gave little assurance that the Bow River recreational fishery was of concern to the AEP water management policy directive that appears to indicate that the protection of the City of Calgary against flooding and downstream agriculture needs for increased water supply during a drought year outweighs the directives in the Alberta Water Act to protect the aquatic environment, the fishery and a sizable river recreational resource.

The Impact of Bow River Water Management on the Fish Population: This document reviews current water management operational procedures and objectives. It is hoped that further investigation will take place within government departments to define ways to protect the Bow River ecosystem and its fishery. But in the meantime, TransAlta Corporation and the water regulators can play an important role in balancing the Bow River flows to not only improve flood protection for Calgary and drought relief to the farming community but also protect the fishery. In July 2018, we were pleased to see TransAlta act to correct what we saw as extreme and unnecessary flow fluctuations. We have asked for TransAlta to do the same in recent years but their ability to respond appears to be hindered by the AEP management directives during the Ghost Reservoir draw down and fill periods of April to July.

The Alberta Trout Fishery – A Vision for the Future: This report discusses the economic importance of the foothills fishing zones to Alberta’s economy. But equally important, if the Bow River fish population does continue to decline and become less attractive to fish, the economic impact will be felt across the entire southern Alberta recreation economy. The report also addresses the importance of water management policy to the Bow River fishery survival. 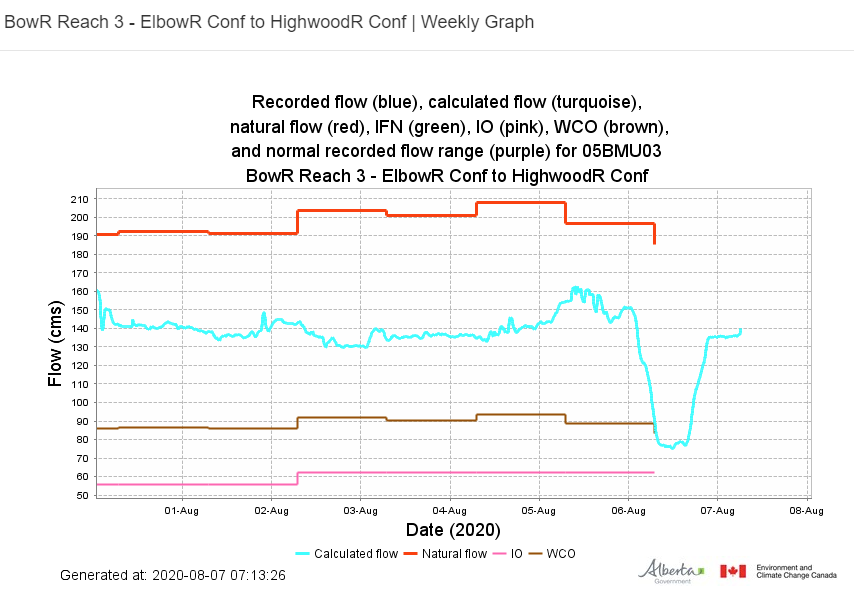 Bow River Water Management Operations:  AEP and TransAlta Hydro Operations were contacted with two rapid drops in water discharge out of the Ghost/Bearspaw Reservoir system on July 03, 2020, and August 06, 2020. Although different in the source, the directives given by AEP Bow River Water Operations to TransAlta did reduce river flows by 100 cms within a very short period on both occasions. The magnitude of the drop in flow did impact the fishery, possible fish survival, and the ecology of the river. What is also important is that the Water Conservation Objectives (WCO), were exceeded on both dates on the reach of the Bow River from the Elbow River to the Highwood River. The WCO within itself does not protect the Bow River fishery directly, but rather maintains an adequate supply of clean water for all downstream water license holders. TransAlta has its own internal water management operation guidelines of a maximum of 15 CMS/hour change in discharge. This standard was exceeded on July 03, 2020, that initiated an internal review of operation procedures. But on August 06, 2020, the drop was kept well within the 15 cms /hour threshold but extended for 10 to 12 hours to meet the request for a drop of 100 cms in water flow.

These recent events make it very clear that some degree of water management policy change is needed to protect the fish of one of the world’s most treasured trout fisheries and help enhance the recreational fishery for the future of Albertans. Without a recognition of the importance of the Bow River fishery and enactment of water management policy to protect it, the trout fishery could lose its position as a driver for the southern Alberta recreation, the economy, and the social importance to the region.