Calgary recreational river users have seen significant commitments to infrastructure improvements in recent years. But there are weaknesses in site development and upkeep across the Lower Bow River. Calgary River Users’ Alliance (CRUA) continues to advocate for improved river access and river recreational infrastructure to meet the ever-increasing popularity of outdoor pursuits. Several of our member organizations have played important roles to spearhead infrastructure developments while CRUA has taken the lead on others. Although we have seen significant commitments at Policeman’s Flats and McKinnon Flats, Legacy Island is at the forefront of needed repairs and upgrading.

Legacy Island, formally known as Jensen’s Boat Launch, was developed into a public river access mid-point between McKinnon Flats and Carseland-Johnson Island in 2002 with a lease agreement between the Government of Alberta and Trout Unlimited Canada – Bow River Chapter. The project was financially supported by public donations, local government, and adjacent property owners. A boat ramp and the parking lot were established on the main stem of the Bow River, while access to the island was by way of a ford across the backchannel from the county road.

The island provides much-needed river access for all forms of river users. The property also offers wildlife habitat and the opportunity for bird watchers to observe a wide variety of species over all seasons of the year. The island represents a small but valuable piece of preserved habitat within the river valley and within easy reach of Calgary and neighboring communities. A condition of the lease agreement is to assure public access to the property and maintenance of the road, parking lot, and riverboat ramp while protecting the island environment as best as possible. 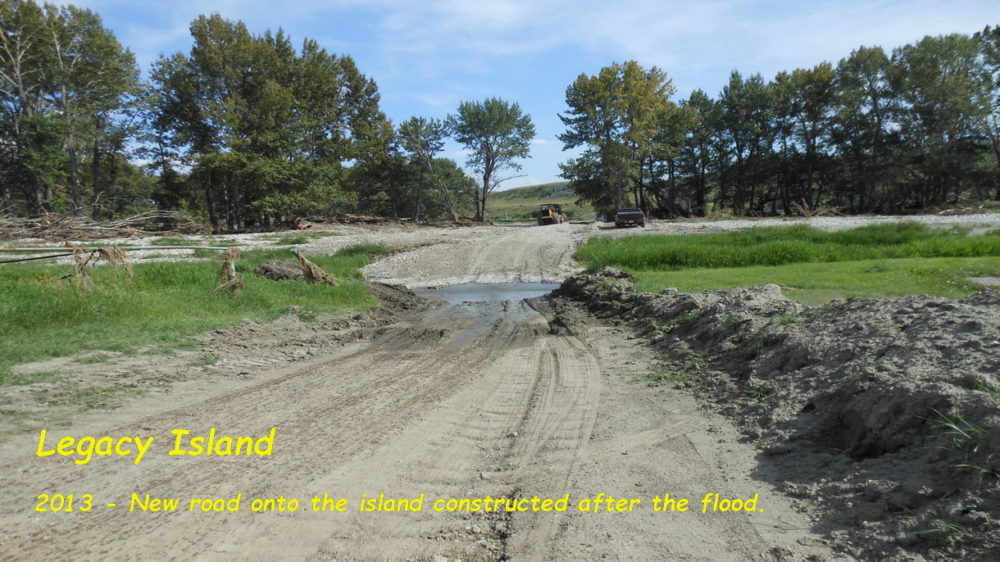 The flood of 2005 and again in 2013 had an enormous impact on Legacy Island. Although the damage from the 2005 flood was mitigated by the Government of Alberta. The damage from the 2013 flood was so severe that a TUC-Bow River Chapter  redevelopment of the property’s access to the parking lot and river needed immediate attention.

A shortfall of this redevelopment project was the grade of the new roadway from the backchannel up onto the island. It is too steep for all but four-wheel vehicles to drive up onto the property.  The road has deteriorated over the years whereby in 2016 it was evident that an upgrade was needed. Unfortunately, the TUC-Bow River Chapter has been unable to recognize the importance of the Legacy Island River Access site to recreational river users and has resisted many offers of support on remediation efforts.

The Government of Alberta Bow River Access Plan (BRAP) from 2013 recognized the importance of Legacy Island as a river access site. “The GoA is committed to working with the leaseholder to consider potential site improvements, opportunities for funding improvements, and the ongoing stewardship of the site. These improvements could include, improving the parking area, conducting an engineering study to access crossing options for the site channel that would ensure the ongoing flow through the side channel, install a formal boat ramp, restricting access to areas adjacent to the parking lot, and installing washrooms, garbage, and signage”. But the commitment has not been acted upon. 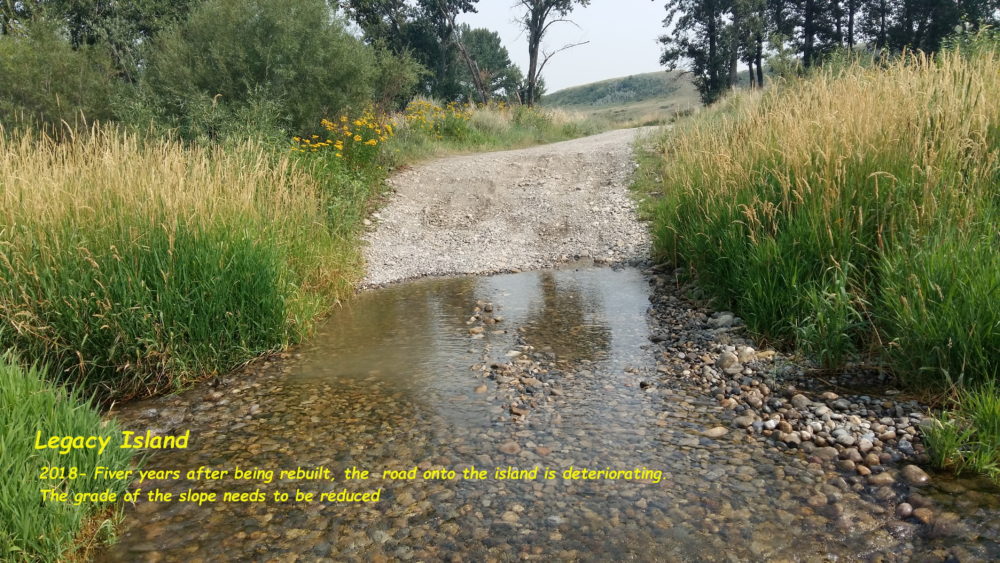 From Legacy Island’s inception in 2002, a considerable amount of volunteer time and resources have contributed to the maintenance and upgrades of the property. In 2016 two Alberta Conservation Association Community Grants were received to maintain the property and look at options to enhance access and conserve the island habitat. The investigations indicated Legacy Island was a good candidate for infrastructure improvement, but unfortunately, there was resistance to advance the project. Opportunities to work collaboratively with other organizations to maintain the roadway across the property to the boat ramp have not been considered a necessity. But in the past year, increased vehicle traffic has deteriorated the roadway further making access to the island almost impossible.

Calgary River Users’ Alliance initiated discussions within Trout Unlimited Canada acting on behalf of the Bow River Chapter in May 2021 to define the scope of development needed to not only improve the road access to Legacy Island but also protect the ecology of the property for future generations. Funds will be needed to support projects to meet the obligation of the lease agreement and improve access to this important Bow River access site. Progress with this initiative has been slow and at the same time, access to the property has deteriorated further. Over the summer of 2021 more than 20 vehicles were stuck in the backchannel attempting to access the island. It is only with the good nature of the adjacent property owner that vehicles could be pulled to safety.

It is hoped that community support together with Trout Unlimited Canada and the local Bow River Chapter will take up the challenge to upgrade access to Legacy Island and restore the property to what it once was;

“A treasure in the network of Bow River access sites”.

To engage with Trout Unlimited Canada, the contact information: